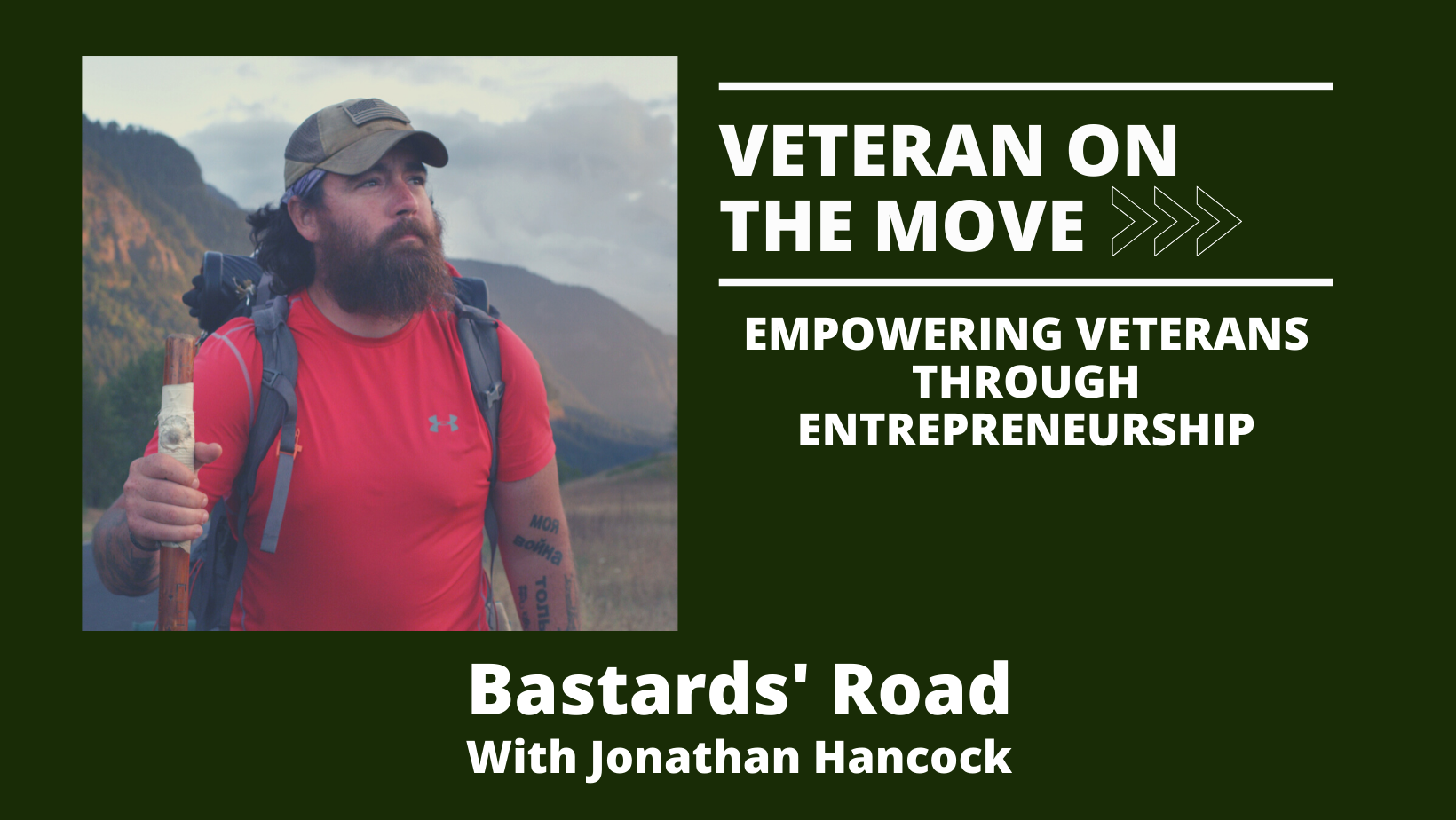 Marine Corps combat Veteran Jonathan Hancock came by the show to share his story that was documented for a feature film called Bastards’ Road. Bastards’ Road is an award winning documentary recounting Jon’s 6,000 mile walk around the country. Jon decided to take this journey in 2016, after he had attempted suicide and was struggling with PTSD and his new role as a college student. During his walk, Jon met with Gold Star Families, an act that was healing both for Jon and the families of the fallen. Jon’s journey helped him reclaim values that were important to him as a Marine, like loyalty and self accountability. Jon and Joe discuss the importance of listening to our Nation’s combat Veterans and respecting their experiences and the stories of those who didn’t return home.

Are you a Veteran who is transitioning to Entrepreneurship? Then check out this FREE download for the Top 29 Entrepreneurship Programs for Veterans & their families! Download Here !

Back in 2016 a Marine Combat Veteran, battling PTSD and looking to reclaim his life after a suicide attempt landed him in the hospital Jon Hancock walked nearly 6,000 miles around the country visiting Gold Star families (those who had lost one of his fellow Marines in combat) and he ended that journey in a grand fashion at Camp Pendleton in southern California… Marines stood at attention every 50 ft for a mile as Jon completed the last steps of his walk with hundreds of people behind him. Jon Hancocks advocacy has strengthened since after the walk with the formation of his non-profit organization, Bastards Road Project. He has been featured on national interviews in Forbes.com, CNN, Cheddar, Military.com, as well as across the country in the OC Register, Florida Today, and Baltimore Sun, among others. His remarkable honesty, insight and humor encourage strength to face down trauma and the self-loathing, depression and isolation that follows it. The documentary feature film Bastards Road directed by Brian Morrison (who also lensed & produced the film) chronicling Jons epic walk is the winner of seven festivals in 2020 and true a journey of the heart and soul across our country. The feature film documentary Bastards Road is being released by Gravitas Ventures, a Red Arrow Studios company, across all TVOD/Digital platforms (iTunes, Amazon, Fandango Now, YouTube, Vudu, Google Play, etc.) & DVD throughout the North American continent and is available now leading thru Memorial Day, with an international expansion planned for later this year.

Check out Veteran on the Move on Facebook to connect with our guests and other listeners. A place where you can network with other like-minded veterans who are transitioning to entrepreneurship and get updates on people, programs and resources to help you in YOUR transition to entrepreneurship.

The Navy Federal Credit Union More Rewards American Express card earns members 3 times the points at supermarkets, food delivery and gas, plus 1 point on everything else.

Did you know? With the More Rewards credit card from Navy Federal Credit Union, you can earn 3 times the points at supermarkets, food delivery and gas, plus, 1 point on everything else. Your rewards won’t expire while your account is open, and you can redeem them for cash, travel, gift cards and more.

Plus, the More Rewards card is contactless, so you can make payments quickly and securely with just a tap of your card.

Speaking of rewards, you can get a Navy Federal auto loan and reward yourself with a new car. Applying is easy—you can do it on their mobile app, online or by phone, and it’s SO FAST, you can get a decision in seconds.

Right now, rates are as low as 1.79% APR. Plus, with Navy Federal’s Car Buying Service powered by TrueCar, you can shop, compare and save on your next new or used car. So, whether it’s your first car or your dream car, Navy Federal can help you cruise into a monthly payment you can afford.

Find out more and apply at navyfederal.org.

At Navy Federal, our members are the mission.

Navy Federal is Insured by NCUA.

Open to the armed forces, the DoD, veterans, and their families.  American Express is a registered service mark of American Express, used by Navy Federal under license.  Credit and collateral subject to approval.  Rates subject to change and are based on creditworthiness. Rate available for new vehicles. Message and data rates may apply. Visit navyfederal.org for more information and to apply.

Want to be our next guest? Send us an email at interview@veteranonthemove.com.

Did you love this episode? Leave us a 5-star rating and review!

Veteran On the Move podcast has published over 375 episodes. Our listeners have the opportunity to hear in-depth interviews conducted by host Joe Crane. The podcast features people, programs, and resources to assist veterans in their transition to entrepreneurship.  As a result, Veteran On the Move has over 1,000,000 verified downloads through Stitcher Radio, SoundCloud, iTunes and RSS Feed Syndication making it one of the most popular Military Entrepreneur Shows on the Internet Today.