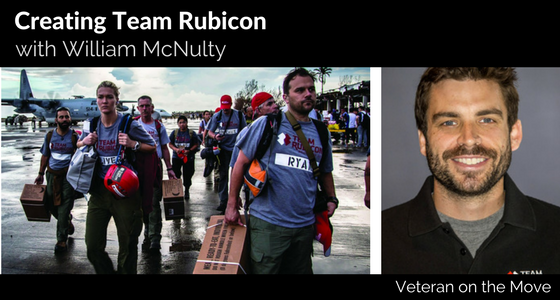 Disaster response teams in the spotlight today as Joe Crane talks about creating team Rubicon with Marine Veteran William McNulty. Learn how they started, what it takes to be a part of them, and how you can get involved.

“This organization is disrupting not only the disaster response base but also what it means to be a military veteran.” – William McNulty

Service in the Defense System

William enlisted in the Marine Corps soon after graduating from the university in 2000. He served as a TOW gunner for three years in the West Coast.

He went on to become part of the intelligence community. It opened the doors for him to work for various agencies which included the Defense Intelligence Agency and the National Security Council’s Iraq Threat Finance Cell.

He could hardly tell the difference between his Marine Corps and civilian job. He’s worked in a similar sphere.

After his second return from Iraq, however, he faced the same struggles of other military veterans. He came to ask himself about the thing he wanted to do the rest of his life.

During that time, William decided to travel around Central and South America. It led him to start a company with his friend.

But the 2010 Haiti earthquake changed their direction forever. They became the first responders and helped secure doctors and emergency personnel who went to the affected areas. That started team Rubicon.

To hear about Creating Team Rubicon with Marine Veteran William McNulty, download and listen to this episode.

Marine Veteran William McNulty is the Founder of Team Rubicon, a nonprofit disaster response organization composed of military veterans that deploy across the USA and around the world. He graduated with a Bachelor’s degree in Economics and Communications Studies from the University of Kansas and an M.A. in Government from The Johns Hopkins University. At present, he also serves on the Board of Directors of Airlink Flight, the Advisory Board of the Truman National Security Project, and is a member of the Council on Foreign Relations.