From CO to CEO with William Toti 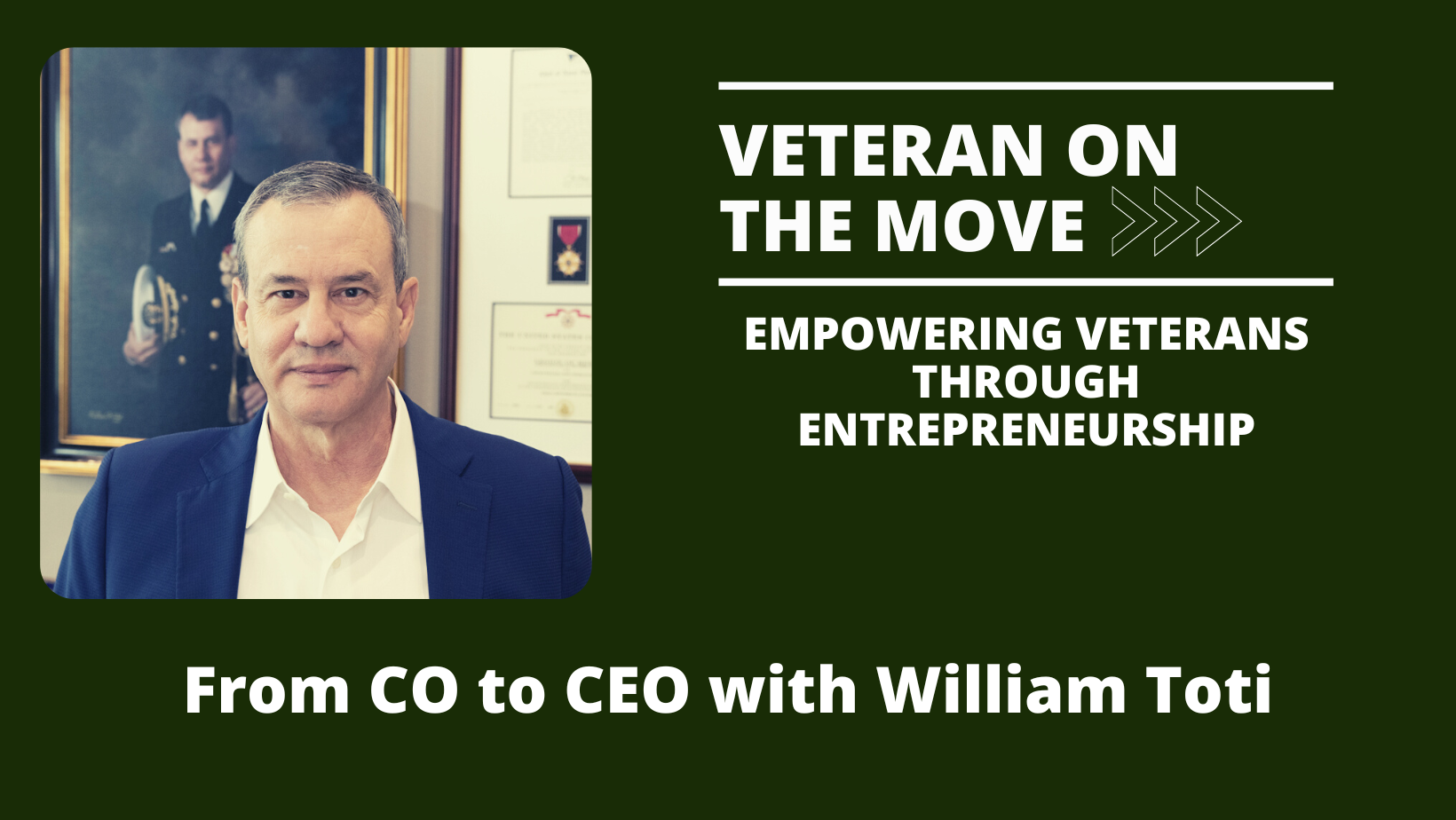 This week Joe is joined by William Toti, retired Naval Officer and author of From CO to CEO: A Practical Guide for Transitioning from Military to Industry Leadership. William served for 26 years on Active duty including tours as a fast attack submarine Commanding Officer and Commodore of Submarine Squadron Three. He timed his retirement to facilitate a successful transition into the corporate world and served over a decade in the defense industry. William shares with Joe the motivation behind writing his latest book and the lessons he wants to share with Veterans looking for a career in industry. Listen today to learn why it is important to have an informed passion to learn and why you need more than good leadership to be successful in Corporate America.

From CO to CEO on Amazon

Captain William Toti, US Navy (Retired), is author of From CO to CEO: A Practical Guide for Transitioning from Military to Industry Leadership. He served for more than 26 years on active duty in the U.S. Navy, including tours as commodore of Submarine Squadron 3 and as commanding officer of the nuclear fast attack submarine USS Indianapolis (SSN-697). Ashore, he served as special assistant to the Vice Chief of Naval Operations and as deputy director of the Navy War Plans Cell, Deep Blue. In industry, he served more than a decade running multi-billion-dollar global defense businesses, culminating in a role as CEO of Sparton Corporation.

Captain Toti is a graduate of the U.S. Naval Academy, the Naval Postgraduate School, and has done executive coursework at the Harvard Business School. He is author of the 2022 book, From CO to CEO: A Practical Guide for Transitioning from Military to Industry Leadership.

His narrative titled Antoinette, describing his experiences during the September 11, 2001, attack on the Pentagon was incorporated into the book Operation Homecoming. He was featured in several related documentaries, to include 9/11: Inside the Pentagon, 9/11: The Pentagon, and the 2021 National Geographic docuseries, 9/11: One Day in America.

Check out Veteran on the Move on Facebook to connect with our guests and other listeners. A place where you can network with other like-minded veterans who are transitioning to entrepreneurship and get updates on people, programs and resources to help you in YOUR transition to entrepreneurship.

At Navy Federal, our members are the mission.

Want to be our next guest? Send us an email at interview@veteranonthemove.com.

Did you love this episode? Leave us a 5-star rating and review!

Veteran On the Move podcast has published over 430 episodes. Our listeners have the opportunity to hear in-depth interviews conducted by host Joe Crane. The podcast features people, programs, and resources to assist veterans in their transition to entrepreneurship.  As a result, Veteran On the Move has over 7,000,000 verified downloads through Stitcher Radio, SoundCloud, iTunes and RSS Feed Syndication making it one of the most popular Military Entrepreneur Shows on the Internet Today.

Disclosure: Some of the links above are affiliate links. This means that, at zero cost to you, I will earn an affiliate commission if you purchase via the link provided.