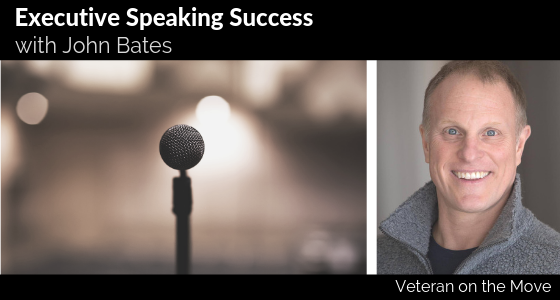 John Bates’ why is to bring out what is awesome inside of you, so it can live in the world and make a real difference. Hilarious, entertaining and actionable, his large and small group trainings, keynotes and 1:1 coaching are famous the globe over. His offerings thrill audiences, meeting planners and HR, alike.

After getting his start by absolutely blowing his first talk on the TED stage, John has gone on to train hundreds of TED/TEDx speakers in countries from the US to Yemen in what he learned, the hard way. He also works with C-level executives at top global corporations to make their communications “TED-Worthy.” Executives from organizations like Johnson & Johnson, NASA (where he most recently trained the Astronauts), Boston Scientific and more recommend him to their colleagues as the best, and most fun, leadership communication trainer working today.

John grew up in the Marine Corps.  His father was a Combat Marine in Vietnam.  John wanted to fly but wasn’t allowed to so he ran away with his rock band.

“But it turns out that performance experience is actually tremendous value in business, you know   So I don’t feel as bad as I used to about doing that. It was pretty fun too. ” – John Bates

How I Got Started

John has been an entrepreneur his whole adult life and had debt and stock worth millions from start up companies he was part of.  He got married and wanted to provide a better life for his wife and decided he would like to be a speaker coach. He was passionate about being a great speaker and saw how he helped transform others.  John began as an Internet entrepreneur & consultant in 1994 and has always been a Founder or early employee and senior executive team member at startup companies.

“I called my friends who would be the kind of people who would hire speaker coaches and they all said, John Speaker Coaches are a dime a dozen.  You don’t want to do that. That’s a nightmare. Do something else. So I cried about it for a little while and then I finally just said, you know what?   I know I provide value. I have seen people come alive when I work with them and this really provides value. So I did it anyways.” – John Bates

When John was solely focused on money he realized that he wasn’t successful.  When he switched his focus to providing value he started making money. John found that it was a powerful transition and that he need he had the value added component.

“I think it’s important to think about money, right, because money, the funny thing about sustainability is you have to sustain it and that’s what money and profit does.  But the sole focus for me, the focus being so much on the money and not really as much on the value. I had heard that before, you know, provide value and you make money. But that was when I actually experienced it.” – John Bates