Some Gave It All with Danny Lane 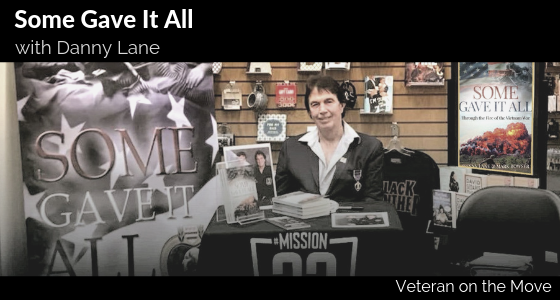 Danny Lane is a highly decorated US Marine. He was awarded two Purple Hearts, the Marine Combat Action Medal and numerous other commendations and valor for his service in Vietnam. Danny is a retired police officer and homicide detective. He is martial arts master in the Chuck Norris System, former bodyguard to stars and corporate VIPS and private investigator. Danny works high profile criminal and civil cases nationwide.

Danny was 19 year old and when the draft was instituted and he got a draft notice in 1968 that he was being drafted by the Army.  In the meantime, Danny joined the Marine Corps. His stepfather was a Marine and out of respect for him and his premature death, Danny paid tribute by joining the Marines and go to war.

“I went to Paris Island and South Carolina for basic and went to Camp LeJeune and Camp Geiger and on to North Carolina for the ITR training, which is  the infantry training. Came home for 20 days then went to Camp Pendleton in California for advanced infantry training and the prisoner of war training in the mountains of California.  Arrived in Okinawa for two days and then by November 20, 1968 I was in Vietnam.” – Danny Lane

When Danny was in Vietnam, he started thinking about what he would do when he returned home.  Again, out of honor for his father, he decided that he would like to go into the police force and emailed a few of his step dad’s friends who agreed to help him in any way they could if he made it home.   Danny retired law enforcement after 15 years and started his next venture in martial arts with Chuck Norris.

“I  had already been in martial arts since I was in the Marine Corps, but I also had a chain of martial arts schools.  I started those in 1971. So I had about a 14 year history of having a second job already, as being a martial arts teacher and things of that sort.  So I had a fall back plan when I retired. I went right into martial arts and went into pushing myself more nationally and doing martial arts full time.” – Danny Lane

Danny then went on to the next phase of his career and became a private investigator and eventually and bodyguard.  The preparation in being a bodyguard who had a hit on him from the mafia made him vulnerable as well. Danny drove around in bullet and bomb proof limousines and tried to get his clients in and out within 3 seconds.

“We know that these veterans are coming out and I mean they have, depends on what their, job description was in the military.  But you know, people are looking to hire people that have discipline, have a good work ethic, are hard workers, and dedicated, things like that.” – Danny Lane

Some Gave It All

Danny wrote the book Some Gave It All and it has been out since May of 2018.  It was released by Ingram in observance of Military Month.

“I struggle everyday still with post traumatic stress with the atrocities and things I did, I saw, witnessed.  I’m still part of, I’m still under medical treatment for that. This is 50 years. And for some people it never really goes away.” – Danny Lane

Some Gave It All by Danny Lane