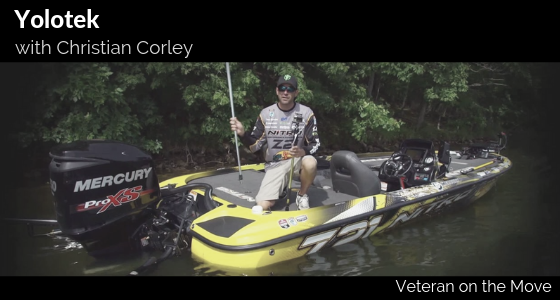 Christian Corley is a lifelong inventor and entrepreneur with a zest for life. His products are in Bass Pro Shops, Cabela’s and many other stores around the world. Check out YOLOtek.com and enter code VETONTHEMOVE for free shipping.

Christian Corley- In the Navy

Christian was in the in the Navy and was an electronics technician.  He was in aviation fire controls and worked on radar weapons and navigation.  Christian was in the navy for 3 years, 7 months, 13 days, 4 hours, 4 minutes and 4 seconds.  The Navy required to sign up for 4 more years or get out 4 months early at the time. Christian chose to get out early.

“I got out in May, so it was a little bit of a jolt to the system.  But, I always say it’s better to get kicked out of the nest then not.” – Christian Corley

Christian loved his time in the Navy and the opportunities he experienced.  Another guy in the Navy had great stock knowledge and Christian wanted to learn about stocks.  The guy sat down with him and taught him everything he knew. Being in your twenties when transitioning out of the Navy it’s not always easy to find a job.  Christian found that his interest was in graphic interface and working with computers.

“In 1987 I actually did a world cruise on an aircraft carrier working on planes.  So all that was awesome.  And that was actually, when two guys that I was in the navy with that were a lot smarter than me and I noticed he was on the phone and I overheard him talking business and I said, hey, I heard you are selling stocks or something.  He said, yeah. Would you mind sharing? You know, the one thing I always found about people in the services, they’ll just take the shirt off their back and do whatever you need.” – Christian Corley

As Christian transitioned from the Navy to civilian life, he started his entrepreneurship path and began working for an individual that could not pay him.  He exchanged room, board and his car payment for work. Additionally he quickly learned that his payments were not being made so he ventured out on his own. Christian made his own business cards and literally started his own company and became a competitor of his previous company the next day.

“About five months later after that and things were rocking, so it was one of those feast or famine deals when I would go sell a couple and when I would close a deal on something, then I would have this big stack of cash.   I’d go out to eat steak and then when we delivered the ad, I would eat another steak and in between that eat top ramen for about three meals a day.” – Christian Corley

Christian says that everyone is an inventor up to a certain point and he loves to invent things.  He had an idea to invent a blanket that went around his chair instead of the bag it goes in so you would never forget your blanket.  Out of this came ToastyTote. Next was an idea for a USB charger for a boat so your cell phone can charge, then a USB charger for your GoPro so you can videoing at 70 mph.  That’s called YOLOtek POWERStick 53. Life is good.

“So just like anybody that’s listening to this in your car, you have a USB car chargers you plug into the 12 volt cigarette lighter basically and turn it into Usb to charge your cell phone or whatever else.  And that’s exactly what POWERStick does on your boat. It plugs in the NavLight turns a 12 volt into Usb, and then you can power your GoPro or other action camera.“ – Christian Corley

To hear more about Christian’s journey, download this episode now.