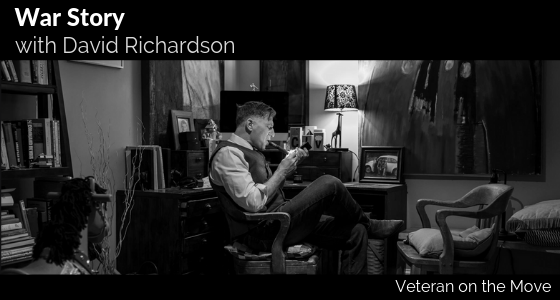 David Richardson is from Waterford, Michigan. From an early age, he was taught to draw and paint by his mother, an artist and an art teacher. Richardson served as a combat arms officer and martial arts instructor for twenty-two years in the USMC, later retiring to paint and write. He was awarded for valor (Bronze Star with V device) during combat operations in Anbar Province, Iraq and served three tours in the wars in Iraq, Afghanistan, and Africa. War Story is his first novel.

David was an artillery officer in the Marine Corps.  He taught artillery school for a while and was at George Washington University as MOI prior to going into combat as a military combat team OIC.  David did a tour in Afghanistan and East Africa but the highlight was being an advisor to the Iraqi Army in Iraq during 2006.

“And that’s kind of what the book actually focused on, that’s why I mention it..” -David Richardson

When David left the Marine Corps, he requested from the monitor when he left Korea to be given a job where he learned something as a civilian and the leadership they teach you in the Marine Corps.  They assigned David to NAVSEA which was an acquisition command and something that he had never done. Upon retiring he got a job at a contracting company.

“Really what I was wanting to do was write a book and sell my paintings because I had painted the whole time I was in the Marine Corps.” -David Richardson

David was painting and started showing his work in galleries around 1998-2000.  He developed a style that was appealing to contemporary art galleries and had difficulty collecting money from the galleries.  David ended up in New York showing his paintings and it did not move as fast as he wanted. Now David represents himself and sells more paintings now than he did through galleries.

“I actually rent venues in downtown DC and an artist friend of mine, who’s never been in the military and he writes for one of the local papers, we do shows together.” -David Richardson

David’s first novel is War Story.  He talks about determination being the biggest take away from the Marine Corps that helped him write a book.  David simply would not give up and saw it through to the end. Giving up was not an option in the Marine Corps.  He wrote three or four pages at a time and took a lot of advice.

“You develop thick skin in the Marine Corps, and for somebody to look at your writing and go you need to change this or that, I never fell in love with my own book.” -David Richardson