Famous People That You Didn’t Know Served in the Military 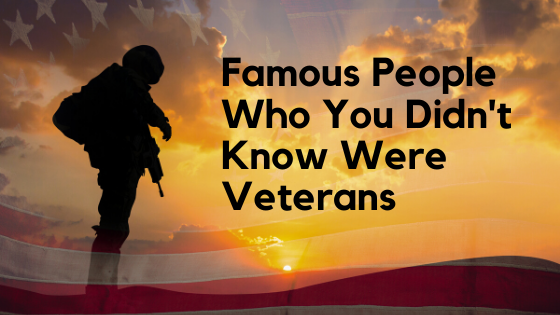 You might read the headline to this blog, “Famous People That You Didn’t Know Served in the Military,” and wonder what does that have anything to do with running small businesses.  The answer is a lot because being a business owner is challenging. It’s not something everyone can do.

We’ve discussed why Veterans make good business owners and, most of that is because of what they have learned while serving our country. The things taught during basic training mold a person’s life forever, and that continues to grow while serving. Then you get out and transition to civilian life and have to make something of yourself.

These people listed below you might not have even known served our country. Today, they are known not only as celebrities because of their acting, music, or businesses they built but as veterans that used what they learned and applied it to their measure of success. They made a living from the qualities they gained, and even the military education benefits to catapult themselves to where they are now.

Here are six famous veterans that you didn’t know served in the Military:

This small list of people is proof that you can do anything you dream of. Transitioning from the Military can seem daunting, but there area opportunities behind every door. We aim to empower veterans and their families through entrepreneurship by connecting them to the people, programs, and resources that will facilitate their successful transition into entrepreneurship.  If you’re a Veteran in transition and want more info, start here.